Wat Phra Singh Woramahawihan is one of the important temples of Chiang Mai. It houses the Phra Singh, a sacred Buddha image of Chiang Mai and the Lanna land created in Chiang Saen style and known among the locals through the name Chiang Saen Singh Neung. 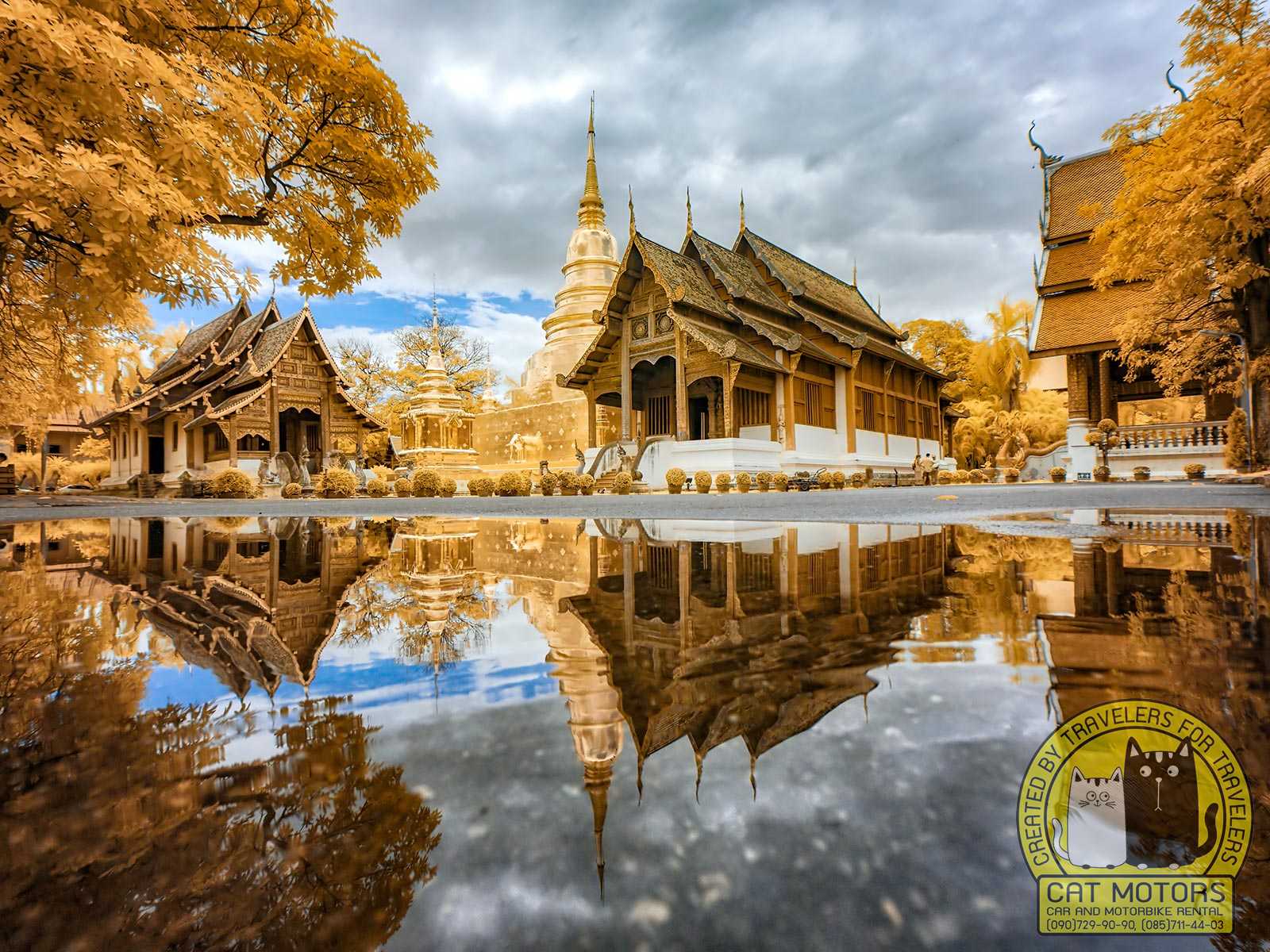 Wat Phra Singh was built in the beautiful and famous Lanna architecture style. During the annual Songkran Festival, or Chiang Mai’s Traditional New Year’s Day, the Chiang Mai City Administration will arrange for Phra Buddha Sihing to be paraded around the city so citizens can bathe the Buddha image on the occasion of the traditional New Year festivals. Per Lanna beliefs, people who are born in the Year of the Dragon should find an opportunity to pay respects to Phra Singh at least once in their lives. 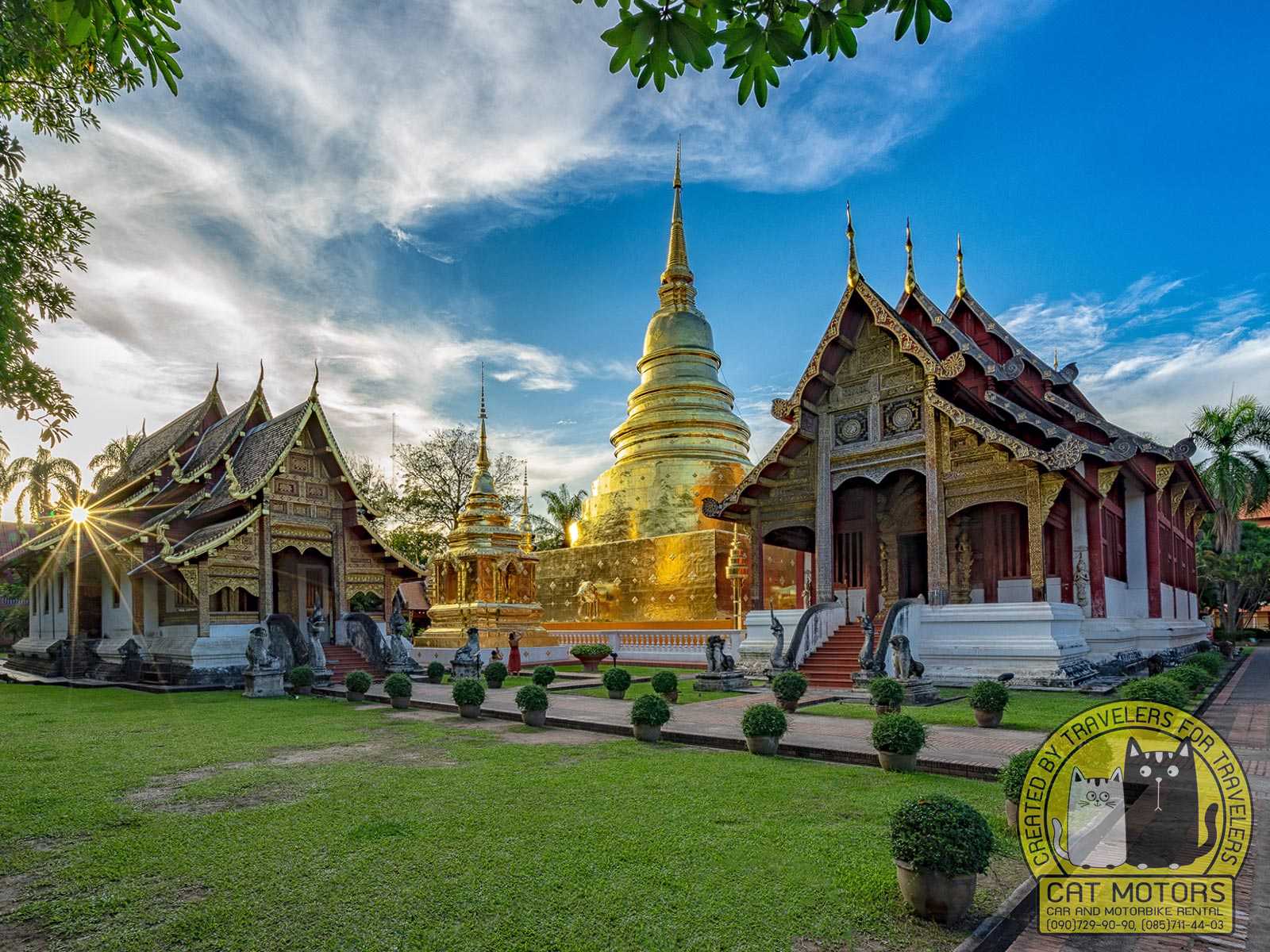 The main temple is a rectangular building with porches both in the front and in the back. The building architecture and decorations are in Lanna style. The sides of the building have large frames covered in wooden lath on the exterior but are functional as actual windows from the inside. There are stucco patterns around the entrance arch. The tympanum has two arches joining together similar to an arched eyebrow. Above the eyebrow are two circles similar to eyes on the pillars. Other parts of the temple also contain various exquisite bas-relief stuccos and gilded statues. 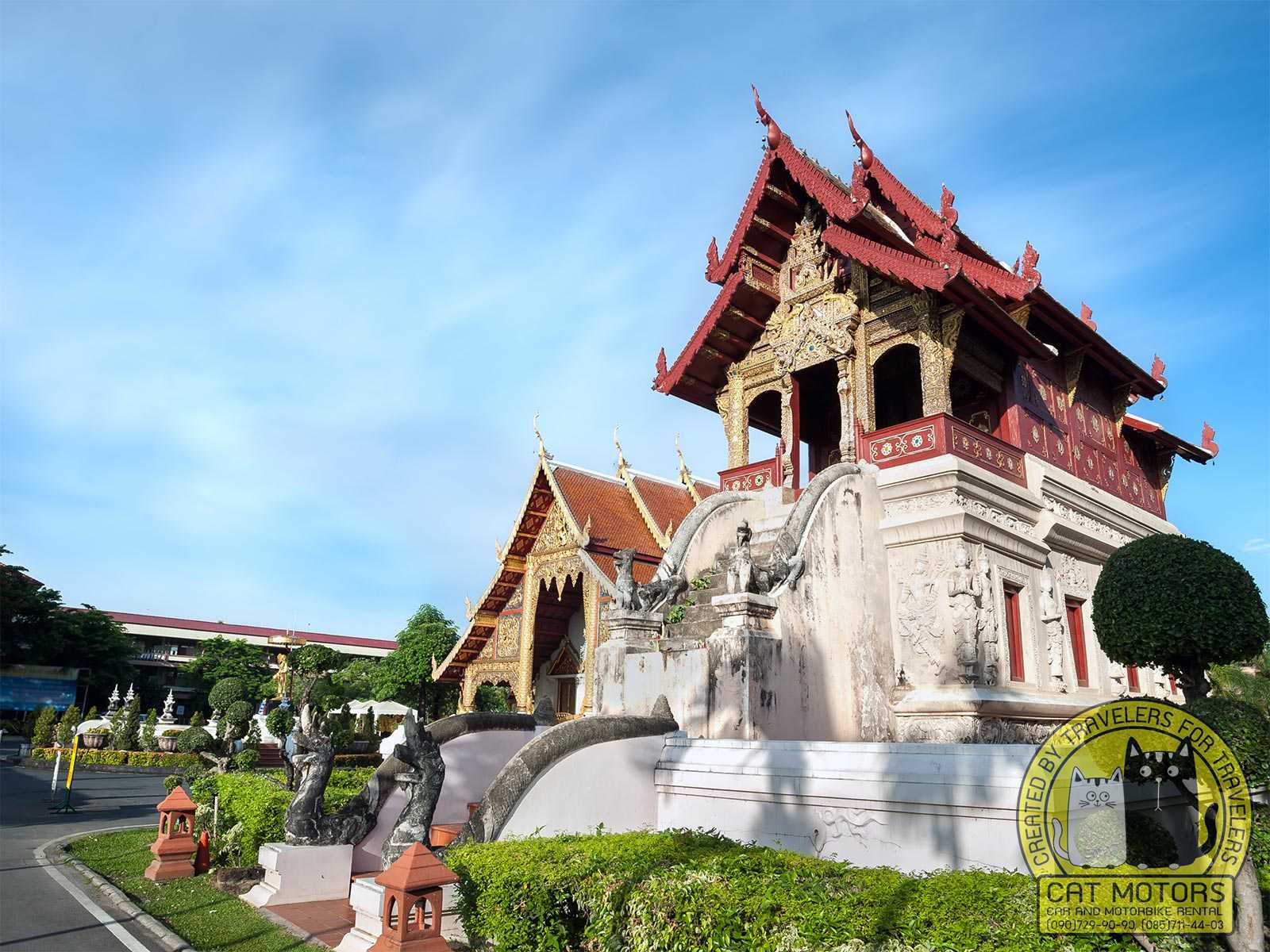 Ho Trai is the temple library. It was built as a wooden structure on a high stone base. The exterior walls are decorated with carvings of Devata figures in various postures all around. A work of architects during the age of Phra Muang Kaew, Ho Trai underwent renovations commissioned by Major General Prince Kaew Nawarat around 1933. The base of Ho Trai is decorated with sinking lotus moldings containing images of mythical creatures, such as winged mermaids, winged gajasimhas (mythical hybrid animals in Hindu mythology), and qilins. The patterns on these mosaics are similar to those seen in the Ming dynasty of China.

Wihan Lai Kham contains many lovely stucco patterns showcasing the brilliance of their creators in their time. The wihan building is constructed in traditional Northern style with two Naga statues flanking the entrance steps, as well as two Singh statues situated nearby. Phra Buddha Sihing is situated within the wihan. The walls behind the primary Buddha images, the core pillars (circular pillars), and the balcony pillars (square pillars) are decorated with various beautiful murals with gold patterns on a red background. 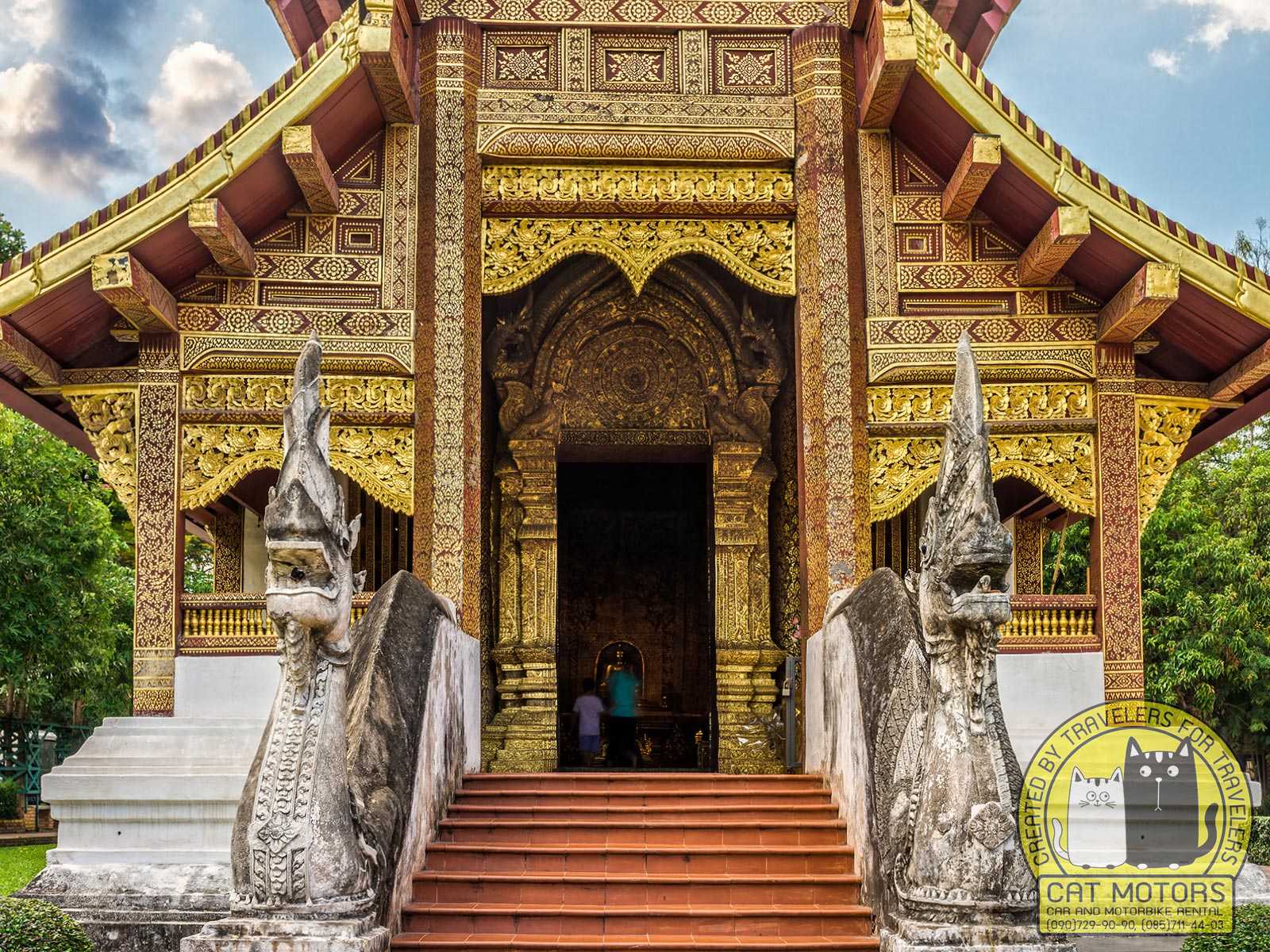 The original Phra Buddha Sihing, or Phra Singh, is an ancient Buddha image in the meditative posture. The image was cast with gilt bronze in Lanna style, with the size being 79 cm tall and 63 cm wide. According to history, the Buddha image was commissioned by the king of Sri Lanka around the year 157, more than 2000 years ago. Later on, the lord of Nakhon Si Thammarat requested the image to be given as an offering to the king of Sukhothai. 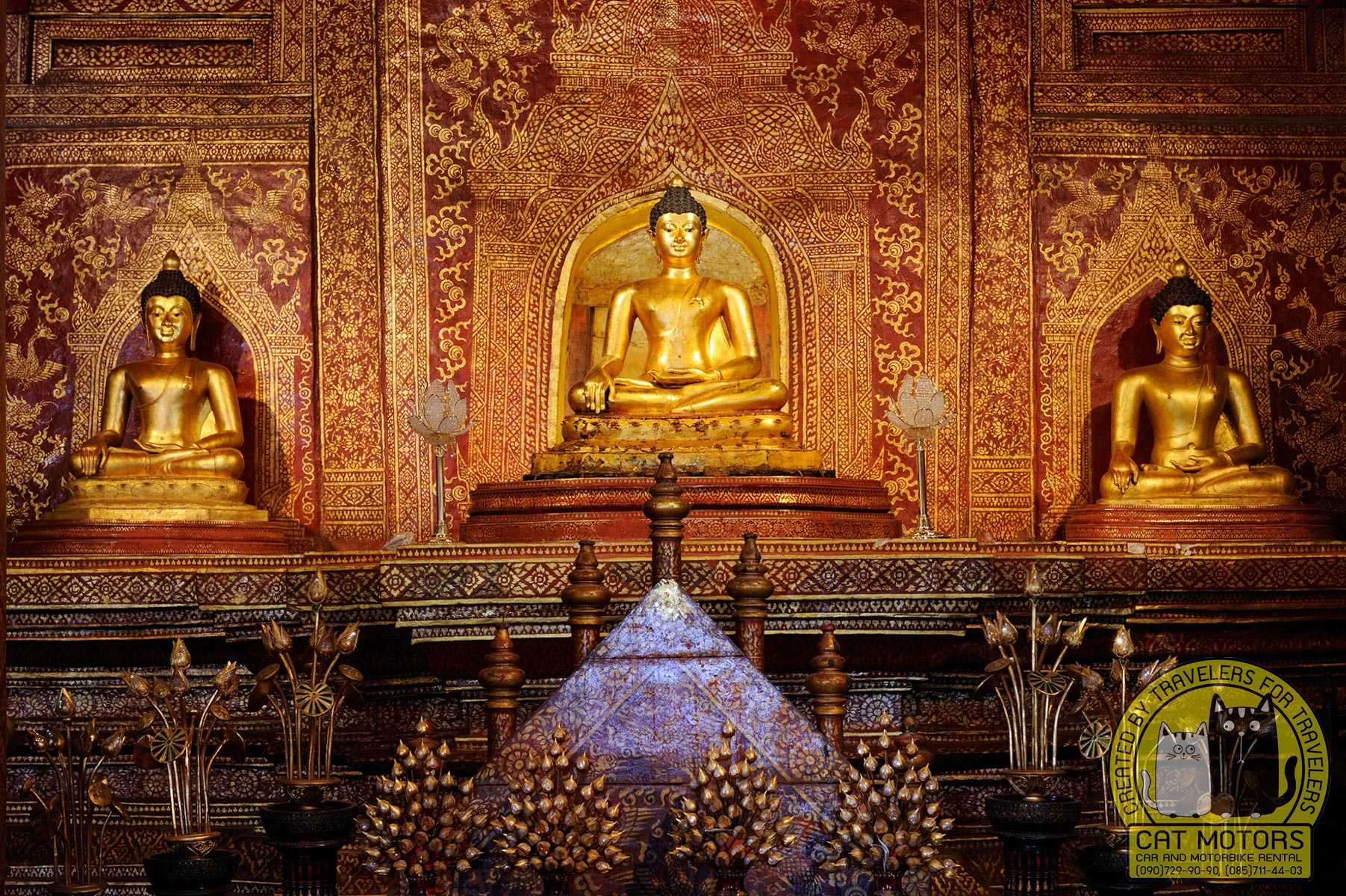 After Ayutthaya fell to the Burmese for the second time in the year 1767, the Chiang Mai people returned the image to their city. Later on, after the northern region returned to Siam rule during the reign of King Rama I, Maha Sura Singhanat brought the image to Bangkok (back then known as Rattanakosin) in the year 1795.

At present, Phra Buddha Sihing is currently situated at Buddhaisawan Hall, Front Palace. During the annual Songkran Festival, the image is brought out so Thai citizens can pay their respects and bathe the image. Meanwhile, the Phra Buddha Sihing image situated in Wat Phra Singh is actually a replica.

How old is Wat Phra Singh?

The temple was first built in 1345 when King Phaya Pha Yu, the fifth king of the Mangrai dynasty and great-grandson of King Mengrai, who founded Chiang Mai, ordered the construction of a chedi to contain the ashes of his father, King Kham Fu.

What is the dress code at Wat Phra Sing?

The dress code at Wat Phra Singh is the same as in all other religious places in Thailand: both for men and women it is mandatory to wear clothes that cover the shoulders, knees and belly. Women must not wear clothing with necklines. It is also forbidden to wear see-through clothing or ripped clothing.

Wat Phra Singh is part of our guidebook 68 Top Chiang Mai Attractions Can Be Visited All Year Round. The temple is located in the center of the old city, so you can easily walk to it in a few minutes, in case you are staying for accommodation inside the city walls.

If you want to explore travel itineraries in and around Chiang Mai and visit neighboring provinces, check out our travel guides.

If you have a driver’s license and are an experienced motorbike rider, you can rent a scooter or motorcycle from our company for your trip. See you! 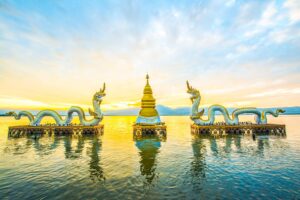 18 Attractions in Phayao That You Cannot Miss
Read More » 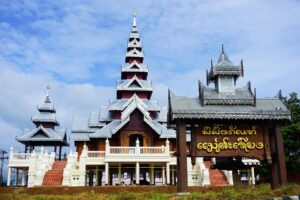