Most Popular Sights of the Golden Triangle (Thailand) 2022

The Golden Triangle (thai: สามเหลี่ยมทองคำ, săam lìiam tong kam) is a geographical area in Southeast Asia located in the mountainous region where Northern Thailand, Northeast Myanmar, and Northwest Laos meet at the confluence of the Ruak and Mekong rivers, which became infamous as a leading global opium trade center in the middle of the last century. 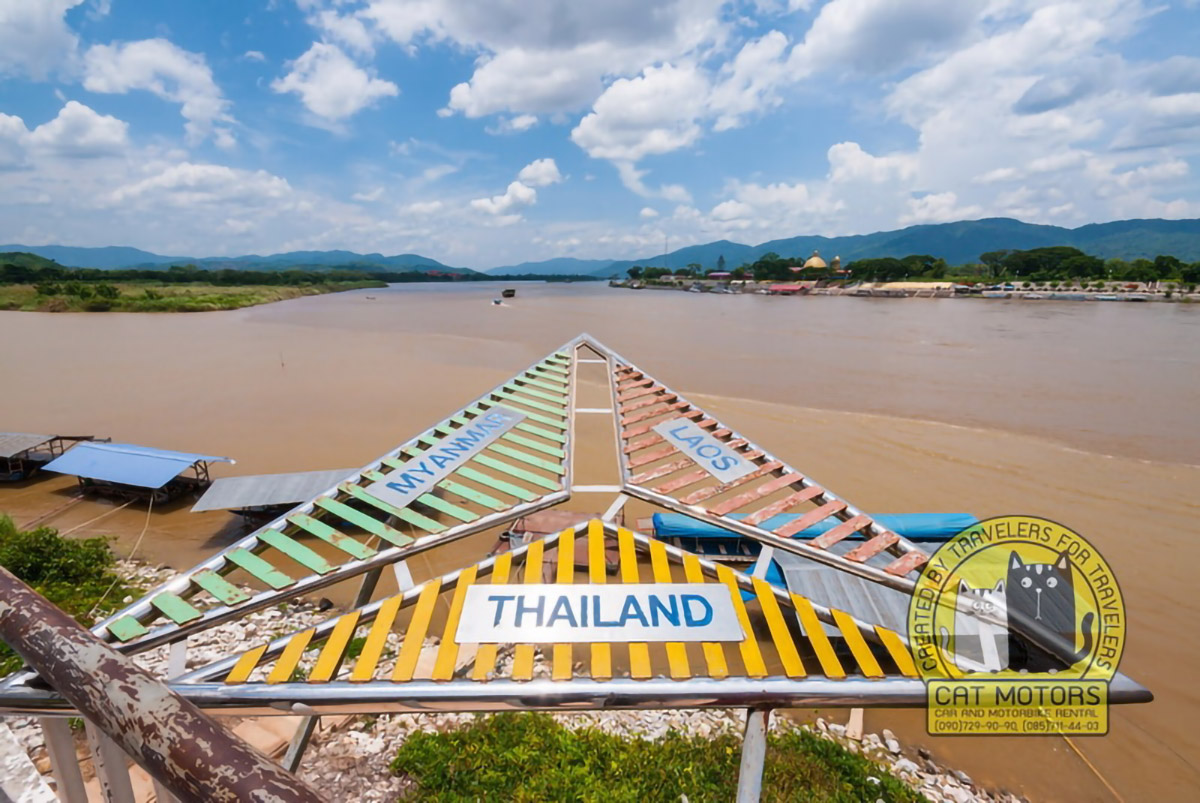 To see the confluence of the Ruak and Mekong rivers and the borders of Laos, Thailand, and Myanmar, climb to the observation deck of the Golden Triangle. Don’t forget to take a commemorative photo. This is your once-in-a-lifetime chance to see the meeting place of three nations and two rivers, which have left a significant mark on modern history.

This tourist route can be combined with the Chiang Rai loop, in this case, the route can take from 2 to 5 days, depending on what attractions you want to see and how fast you will ride a motorcycle. Also, about 2-3 hours away from the Golden Triangle is the famous Phu Chi Fa Mountain, which offers stunning views of neighboring Laos. 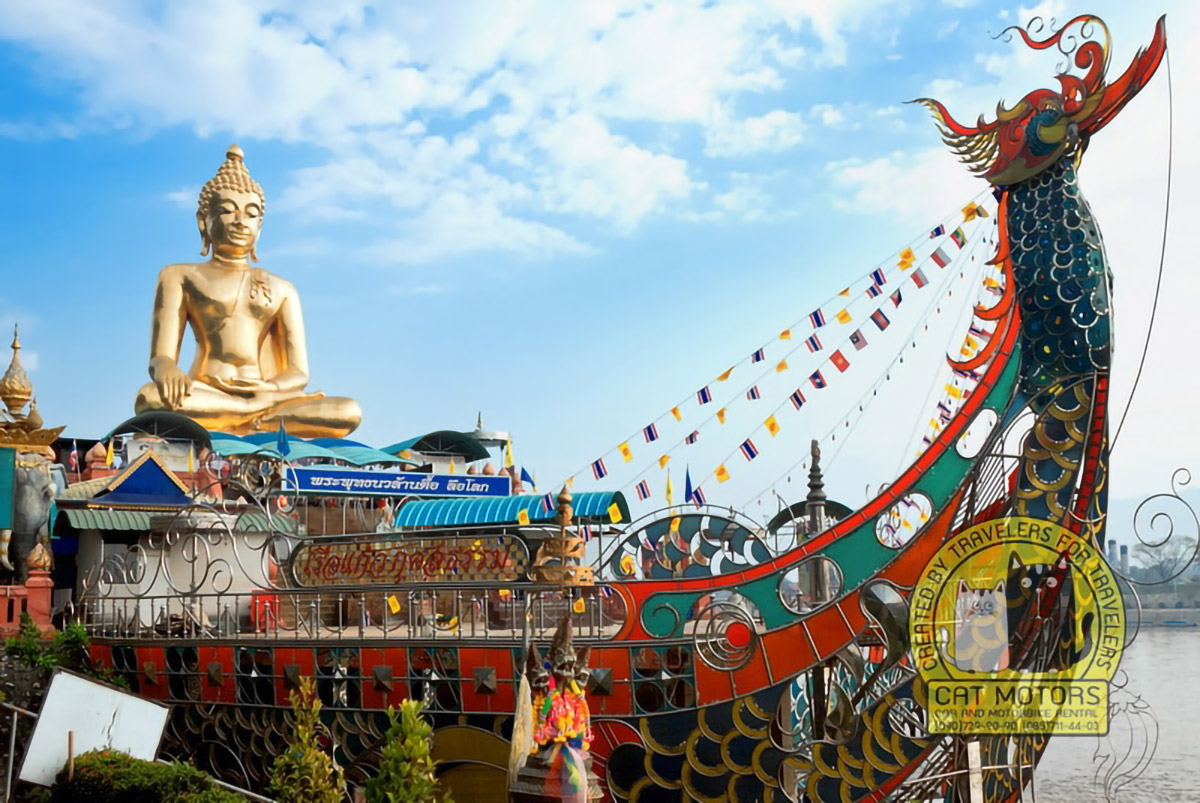 The village of Sop Ruak is located on the Thai side of the Mekong River. Here you can stroll along the waterfront admiring the wonderful views and admire the big Golden Buddha, sitting in the center of the composition, depicting a boat over the Mekong. Other attractions include; a statue of Ganesha, Happy Buddha, huge elephants, and other tourist attractions. 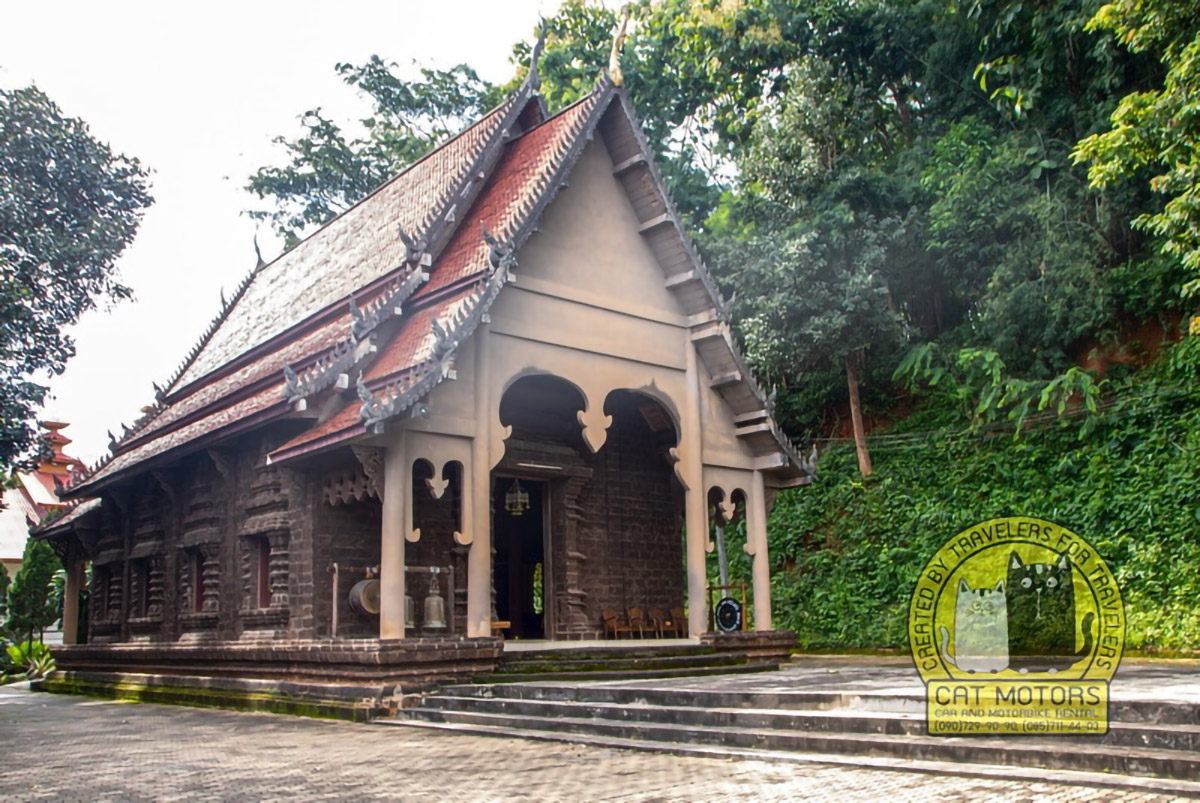 This 1200-year-old temple on the hill above the village certainly deserves a visit. The temple itself is interesting for admirers of antiquities and people not alien to the aesthetic component. But, most importantly, from its observation platform, it offers a wonderful view of the three countries – Thailand, Burma, and Laos. Here it becomes clear why the Golden Triangle is a triangle and if you would like to understand why it is golden you should visit the Opium Museum or Opium Hall. 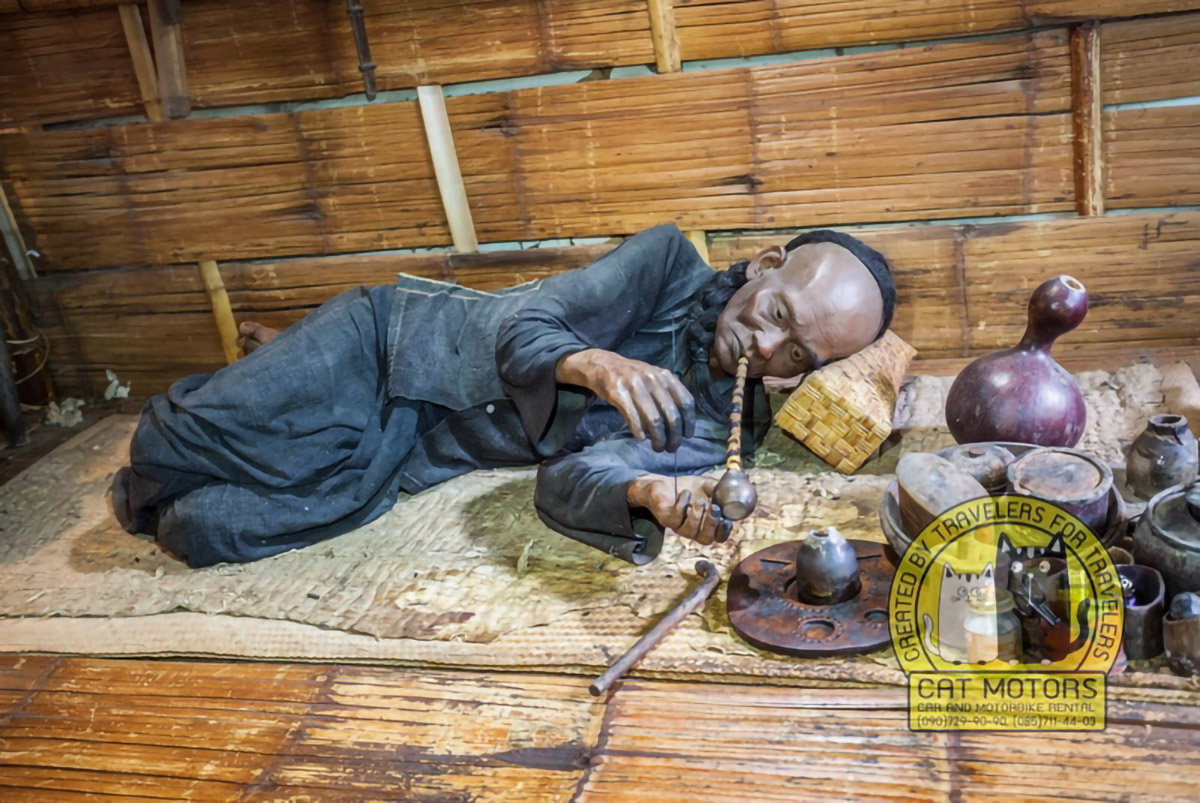 The Opium Museum is small but gives a fairly complete picture of the history of the Golden Triangle. Here you can learn everything about growing and smoking opium. There is also information about the mountain people who grew the opium poppy and the heyday of the Golden Triangle (the 70s). There are some Interesting exhibits and a good souvenir shop. Entrance ticket – 50 baht.

The Opium Hall is essentially the same as the Museum, but much larger, more detailed and more interesting. Entrance ticket is a little more expensive – 300 baht. 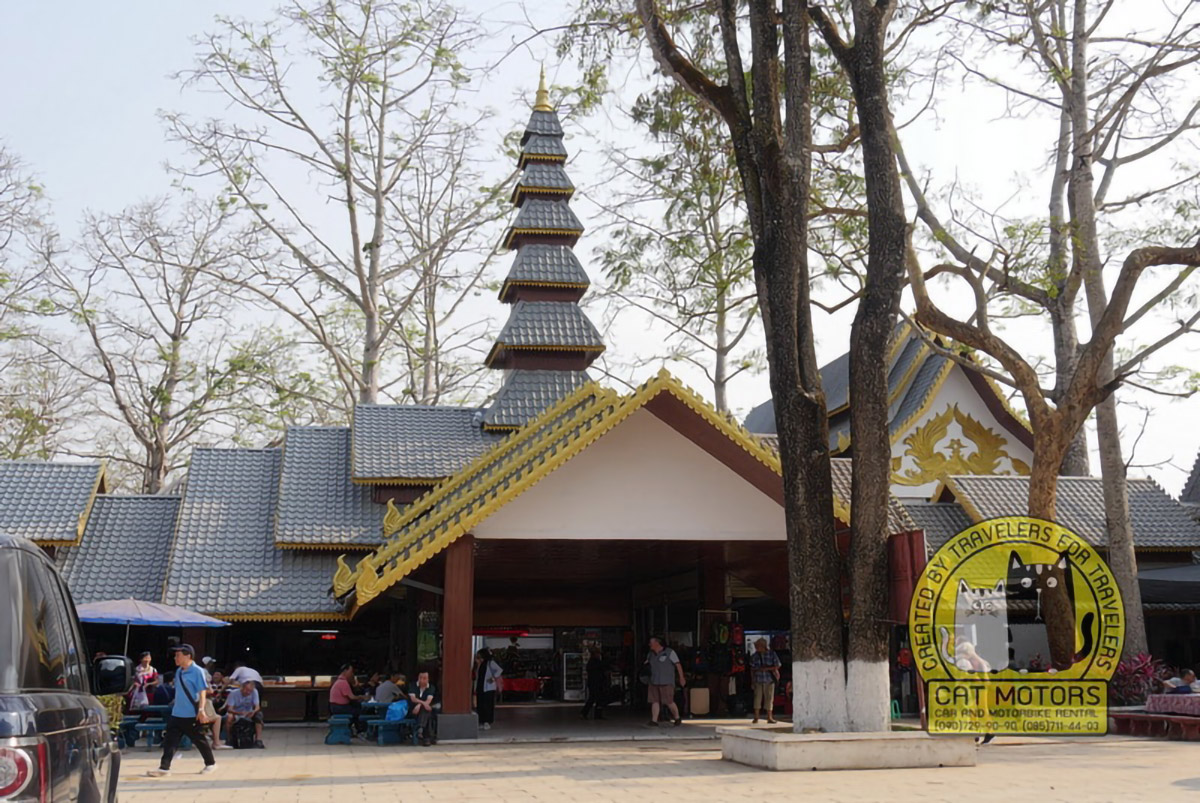 Right on the waterfront village you can negotiate a river trip and visit the island of Don Sao, owned by Laos. There are no sights on this island, only a market with cheap fakes of fashion brands – but the very fact that you visited another country is quite the excitement in itself, plus its worth the ride across the river!

Entrance ticket onto the island – 30 baht 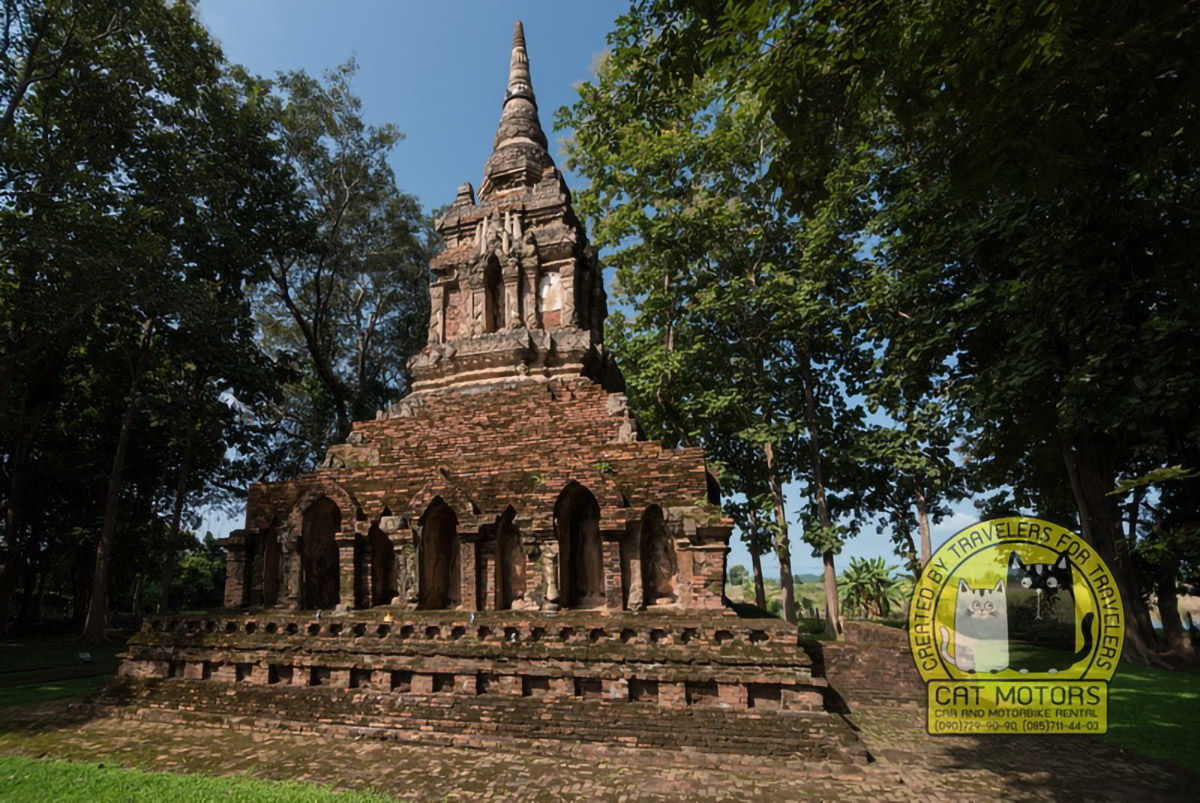 Chiang Saen is the oldest city in Northern Thailand and for some time (not long) was its capital. Here you can admire the picturesque ruins of the fortress walls from XIII-XIV centuries, buildings and a couple of temples of the XIV century: Wat Pa Sak and Wat Jaro That Chedi Luang.

Oscar and Dan do a review for you about a luxury vacation there, staying at Anantara Golden Triangle Elephant Camp & Resort. Honestly, it’s impressive.

If you think there is only one luxury hotel in these remote locations, then you are underestimating the popularity of this place among tourists. The Four Seasons Tented Camp Golden Triangle is nestled in the jungle forest overlooking the Mekong, and has everything you need for a comfortable and luxurious vacation in nature, will surprise you.

Another short but quite informative report from Travel Notes YT Channel

Before riding to Golden Triangle, be sure to check our rental rates and read our motorcycle travel tips. You can contact us to book a motorbike on this page. See you!